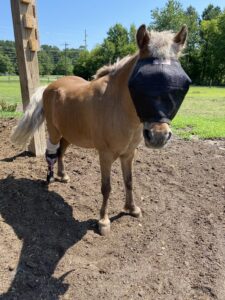 Equine prosthetics for horses, donkeys, and ponies are just the tip of the iceberg of what Specialized Pet Solutions has to offer.   They are a  small female owned company with a huge heart, that was inspired by a three legged pony. When Prince was born his mother died shortly after giving birth, she fell on his leg crushing it, which then required an amputation. He was sent to an animal rescue and was given a whiffle ball bat as a prosthetic. Angela Boncz the Founder, CEO, and lead fabricator at Specialized Pet Solutions was working in the human orthotic and prosthetic (O&P) field when the animal rescue Prince was staying at contacted her employer about the baby pony that needed a home. Angela did not hesitate to adopt Prince. She went to work immediately building him a sturdy one of a kind prosthetic for his stump. Prince was able to run and jump and buck and play immediately after receiving his prosthetic. After all it was definitely a step up from the whiffle ball bat. Prince easily adapted to a prosthetic because he was disabled from shortly after birth and learned to adjust. Some animals take longer to adapt especially if their injury is sustained later in life, although most animals can learn to adjust to their prosthetic or orthotic.

The success Prince was able to experience ignited a passion for helping animals recover from traumatic injuries and Specialized Pet Solutions was born.  In the last 20 years a shift has occurred in society and animals are now treated like members of the family instead of possessions.  As a result animal prosthetics and orthotics are more common, and Specialized Pet Solutions is at the forefront of that movement.  They have successfully built and fit several goat prosthetics, sheep prosthetics, horse prosthetics, dog prosthetics and a pig prosthetic.  As a company they also build custom dog knee braces for CCL tears as well as other custom animal orthotics for various ailments and injuries.  Farm animals including horses, donkeys, cows, goats, sheep, llamas, and pigs have benefited from the care, commitment and knowledge of this special company.  Animal prosthetics have come a long way and at Specialized Pet Solutions they build them with the same quality materials and techniques used for human orthotics and prosthetics. 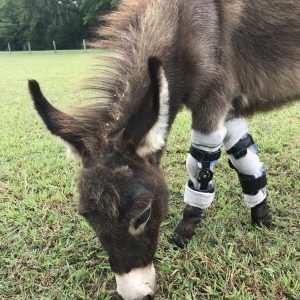 Creative thinking, 20 years of O&P experience, and a love of animals has given Specialized Pet Solutions its key to success.  Success as a business but also success in making a difference for animals and the people who love them.  As a company they are  committed to helping animals live their best life one beautiful soul at a time.